Interesting Article and Graphic from Urbanful On Complete Streets Concepts

Shaun Cortney, writing in Urbanful, recently posted an article about the concept of Complete Streets.  She does a great job explaining the concept and talking about some of the ways that this concept is starting to take hold in American cities and with American planners and designers.  We have reprinted the piece below, and full credit to her and to Urbanful for the quality work and ongoing efforts to make cities more livable and safer for people over traffic.

Included in the article is a great graphic from Swedish artist Karl Jirg.  It shows how little space cities give people and how much downtown space is given to buildings and streets  —  as well as the risks we put on pedestrians as a result of close quarters and proximity to traffic. 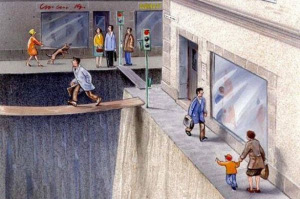 Park Green understands pedestrianization projects and has great experience with streetscapes.  If you are planning to redevelop a downtown or just starting to look at ways to decrease crime and increase commercial usage in an area at night, we can help.  Our expertise and experience with parking and traffic studies and pedestrian safety issues, coupled with such common usages as Farmer’s Markets and Parklets, makes us a One Stop Shop for cities and consultants and architects.

Give us a call —  and enjoy the article below!

The Nickel Tour: You might feel like crossing the street is a dangerous endeavor. This image helps others see just how precarious the pedestrian experience can be.

Urban planners are always looking for innovative ways to rethink the way we lay out our streets. Complete streets advocates want people to rethink the way we allocate our public space—dividing it thoughtfully among cars, pedestrians and cyclists—but data and studies do not get the point across in a quick, comprehensible manner. You need to see it to get it.

And apparently all it takes is one image.

The Swedish Transport Administration recently called on the skills of illustrator Karl Jirg to convey the small amount and precarious nature of street space dedicated to non-vehicle uses.

Jirg’s image shows a pedestrian crossing an intersection, but instead of a crosswalk, the walker is on a plank of wood;instead of providing safe passage in front of cars, the plank spans a rather deep looking chasm. On a nearby sidewalk, you see pedestrians sharing a narrow space between buildings and the ominous hole. A small child tugging at a woman’s hand to run ahead toward the intersection takes on a new sense of danger considering the abyss just a wrong step away.

It is no surprise this image comes out of Sweden. The country has the world’s safest streets. Three out of 100,000 Swedish deaths happen on the roads (that number is 5.5 across the European Union and 11.4 in the United States). The declining road death rate in Sweden is attributed to the country’s 1997 “Vision Zero” law, which has a goal of reducing road deaths to, you guessed it, zero.

Though not a recent creation, the Swedish image popped up on sites like Vox.com and Greater Greater Washington in the past few days because it resonates. People get it.

Consider the popularity of “sneckdowns,” naturally occurring curb expansions created by plowed snow and driving patterns during snow storms, and parklets, temporary and/or permanent park spaces created in what are traditionally considered parking lanes next to the curb. These concepts capture public attention for a topic that (sorry urban planning nerds) many people do not find entirely sexy: Use of public space.

Jirg’s image drives home in a simple fashion the whole point of the Complete Streets movement: So long as our public space prioritizes vehicles above all other modes of transit, our streets are incomplete and often unsafe.